"The static routine of the workplace can narrow our minds. Enlarge your creative scope through regular explorations of the vast territory known as The World of Art (both past and present).

Exploring art is a lifetime journey.

When you explore art, travel lightly: leave preconceptions and opinions behind. Explore galleries, museums, bookstores (new and used), libraries, artist's studios. Meet other designers and find out what they are doing now and what has influenced them in the past. Many cities host a gallery walk at least once a month. How about an art history class?"

This is an excerpt from Creative Sparks, written by Jim Krause, and it offers one a chance to both return to a former schooling and embrace new inspiration.

THOUGHTS…
If, as a designer/artist/professional you find yourself too busy to explore the ever-expanding World of Art, then here are some steps I've come up with to let loose of those tight guidelines that box you in. In this case, embrace Taco Bell's mantra: Think outside the box.
If you have more ideas, leave them in the comments below. Thanks!
Posted by Jeremiah Good Design at 8:05 PM No comments:

The Early Bird Gets The Chicken 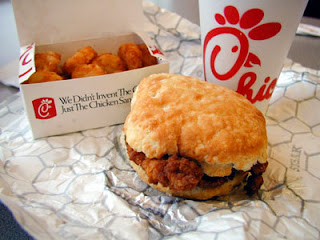 People were lined up out the door, the drive-thru line extended into the intersection, and the phone would not stop ringing—or so people thought. Today, September 29, 2011 was the final Thursday in September for Marylanders to get a free breakfast entree from Chick-fil-a by simply saying: "The early bird gets the chicken", before 10:30am. It was a 1 month promotion (Thursday mornings only) by the chicken restaurant chain who has come to be known by the cows holding signs with this phrase "Eat Mor Chikin." Other phrases associated with them are "I can take the heat" and "We didn't invent the chicken, just the chicken sandwich."

What I learned from this experience:
When a restaurant decides to put a free entree on the table, asks the public to say a simple phrase which is usually advertised over the radio, and greets every customer with a smile, who wouldn't go for it? Who wouldn't get up a few minutes earlier to get a free breakfast? Who wouldn't stop at the Chick-fil-a they pass every day on their way to work? Who wouldn't try to be sneaky and go to multiple locations to get a couple entrees? To answer bluntly: everyone who was too lazy and scared to say that simple phrase. Chick-fil-a put out a promotion that only cost 2 minutes of your time (yes, they're usually that fast!). You walk in, you say to the cashier, "The early bird gets the chicken." As they smile, they say, "Ok. Will that be all?" You say, "I'd like a large peach milkshake and a large sweet tea." No, actually, you don't have to get anything else. I didn't even get my wallet out! When the woman who greeted me asked, "Will that be all?" I said, "Yes." She said, "Alright," turned and requested an "early bird" from the kitchen. I had my bag in 30 seconds. It was simple, efficient, and very fun—tasty too!


How does this effect graphic design, marketing, and/or branding?
Each day we're overloaded with over 5K images asking for our attention, time and money. Each day we choose from these 5K where to spend our lives, our conquests, our resources. Whoever screams the loudest and clearest consistently usually attracts our ambitions, but whoever can do that and give away free stuff will always only get about 35%* of the intended audience to react. The other 65%* are too busy, too distracted, and too lazy to make it happen.
When I first heard the announcement on the radio I was excited, since I missed out on the previous promotion for their spicy chicken sandwich (it was the same idea, only you had to say the phrase, "I can take the heat,"and you got a free spicy chicken sandwich). I totally forgot on September 15, but I was determined not to miss it on the 22nd. I got there on my way in to work, parked the car, went in, and said the phrase. I had also planned on getting a peach milkshake (so I did spend money), but I quickly recognized by the cordial service that I didn't have to buy anything if I didn't want to. So, I took it back to the office and gave it to my boss (he had been out for his brother's funeral and I wanted to cheer him up). When my other co-workers heard about the free entree, they were sad they missed it, but I told them there was 1 more day.
Tuesday (27th), I made little signs and posted them up as reminders for everyone to get their free chicken today. Well, as I rolled in and began talking with everyone, they all missed it again! I had even texted several of them at 7am to remind them, and they still said they didn't have enough time, or forgot, or didn't like chicken!
As a designer/advertiser, I sunk the ship because I'm the only one who benefited from my campaign to help them out! I was 1/12 of the crew and no one else saw this as enough of an opportunity to make something happen to "spice" up their day!


Was it worth it?
Yes. It was worth the sandwich, the campaigning, the smile from the cashiers, the smile from my boss, and the fun of experimenting with the kindness of the chicken giant. I've always been a Chick-fil-a fan and will continue to help them promote good food and good advertising, down to the last waffle fry.


*percentages based solely on personal experience.
Posted by Jeremiah Good Design at 8:21 PM No comments:

JGD has moved to Baltimore! We still have connections in Cincinnati and would love to continue working with current and new clients in both Baltimore and Cincinnati (and anywhere else!)

Each step to move JGD forward has been met with challenges: of finance, of transitions, of new ways of communication, of new technology, of new ideas, of new jobs, of new clients, of new regulations (we could keep going and list everything but why waste the time and blogspace!). But I assure you we are persevering and working to make it an exciting design agency where creativity thrives and brims over into our clients' ads, brochures, websites, graphics, social networks, etc....

To sum it up nicely, Jeremiah Good, our creative director says this:


"Creativity wells up within me. Creating exciting compositions and thinking outside the box keep me inspired: to focus on the task at hand, to be ready to take on the next challenge. As a freelance graphic designer I jump at the opportunities to explore new concepts and projects that help people live more adequately. I believe that making something exciting to look at is just as important for the shirt in the store as it is for the canvas on the wall or the photo in the album. Each detail is important, each color chosen specifically, and each character kerned and tracked to communicate that specific message.

And that's the way it's going to continue to be. If you have ideas, comments or questions, we're always open to them.


There are many ways to reach us. You can leave a comment here on Blogspot. You can LIKE us on Facebook. Or you can send an email to jeremiahgooddesignATgmail.com. We love to hear back from our fans, clients, friends and potential clients.

Note: We're working on our website (see pic below) which will go live in the coming months. Stay connected on here and Facebook for updates on what we're doing. 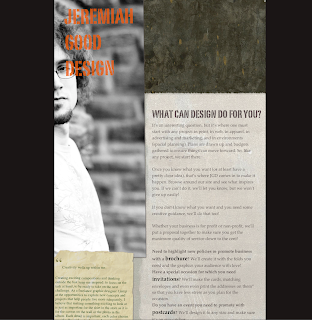 More to come!
Posted by Jeremiah Good Design at 7:12 PM No comments:

For many years I've considered what it means to manage my own company, how to be an excellent familyman, and how to juggle all my other activities. But it just isn't as easy as I thought. There are many good things competing for my time! I love what I do, but there comes a time when I have to accept the challenge of balancing it out! The focus isn't changing on the creative side—that's my strong suit. The focus is going to change in my methods and time that I agree to dedicate to specific people, events and ideas along the way. But it's not my words that will display evidence…it's my actions.
Posted by Jeremiah Good Design at 9:41 AM No comments: